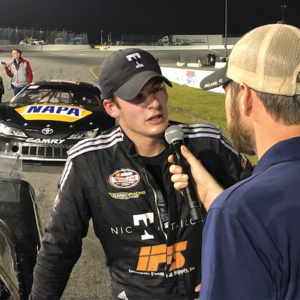 Up and coming North Carolina racer Connor Mosack made his first ever trek to Florida’s short-track motorsports festival known as “Speedweeks” to compete in the Pro Late Model portion of the “World Series of Asphalt Stock Car Racing” at New Smyrna Speedway.  Driving for top tier team KBR Development, Mosack ran with the leaders every night and wound up second overall in the series championship standings. Connor scored six top five finishes that included two 2nd's, two 3rd's, a 4th, 5th plus a ninth place finish in seven starts.

For the High Point University business major, it was a tremendously successful journey, whether it is measured in performance or results.  “I had a great time down there running with KBR Development,” Mosack said. “They made sure I had a car that could run up front every night, and we nearly had a win but got spun out of the lead on the last lap coming out of turn four.  It’s a real challenge running against that level of competition and those drivers are very aggressive, so you have to be on your A-game every lap. It’s unfortunate we didn’t get the win and just missed the championship but it was a lot of fun and it gave me a chance to get some races in before our CARS Tour season starts in March.”

Mosack will race in a full-season of CARS Tour presented by Solid Rock Carriers action, driving for Dale Earnhardt, Jr. and his JR Motorsports team as a teammate to top NASCAR late model stock car series driver Josh Berry, who oversees the program for JR Motorsports.  Mosack admits to being excited to race for one of the top teams in short-track late model racing, but says he feels confident he can produce results.

“I think anyone would be excited about driving for JR Motorsports,” he confirmed. “And I think there is definitely pressure on you to perform well because everyone knows the cars are winning cars, so if you don’t run up front and race for wins, it is not going to be because the car wasn’t capable.  But I had a chance to run with them last fall and I think that Josh and everyone else there are going to be great resources for me to learn from, so I feel like we’re going to have a strong season. I’m looking forward to our first race at Southern National on March 7th.”

The first race for Mosack on the CARS Tour will be at Southern National Motorsports Park in North Carolina.  The Solid Rock Carriers 300 Presented by SRI Performance will take place on Saturday, March 7th.  More information about the series and the race can be found at www.carsracingtour.com .